In light of the refugee situation in the world, and the need for rapid integration into society, NOKUT has implemented an initiative that provides refugees with the opportunity to get a statement about their higher education even if they do not fulfil the requirements for formal recognition of their qualifications. The evaluation and its methodology is based on the methodology used in NOKUT’s UVD-procedure. 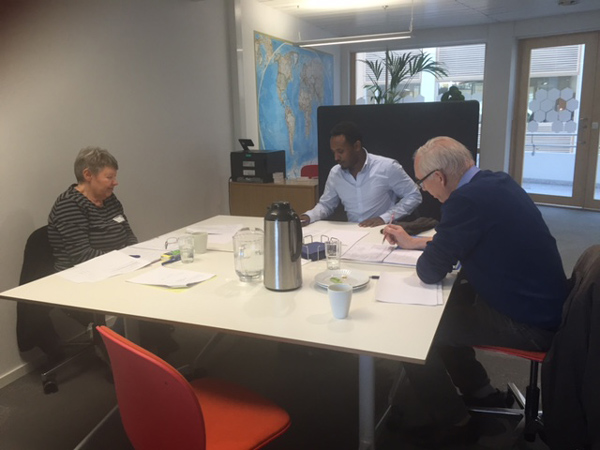 Refugees who do not fulfil the following requirements set in the UVD-procedure: language requirements, requirement for permanent residency and/or who have a incomplete qualification, may be offered NOKUT’s Qualifications Passport for Refugees. This is a statement on the candidate’s level of education,  relevant work experience and language proficiency. In addition, NOKUT provides advice on the road ahead. This Qualifications Passport is not a legally binding decision, but a statement intended to be of help when the candidate applies for work or further studies. It is valid for three years from the date of issue, and cannot be renewed. NOKUT encourages eligible candidates to return and apply for formal recognition once they do fulfil the requirements. This evaluation is a national initiative, based on a proposal made by NOKUT and UK NARIC for a Europe-wide scheme called the European Qualifications Passport for Refugees. “Bearing in mind the legacy of the Nansen passport for refugees set up in 1922, it will establish a multinational framework to organise and establish a fast-track scheme to evaluate refugees’ educational and training background while still ensuring their mobility around Europe” (Mørland, Skjerven 2016). The full report on this proposal can be viewed here.

Impact
Duration: The very first special recognition procedures for refugees were developed in 2005. Since that time NOKUT has been continuously working on improving and developing the appropriate procedures responding to the societal needs. In 2013 the UVD was established as the permanent centralised service administered by NOKUT. A new method for evaluation of refugees’ qualifications – Qualifications Passport for Refugees – was successfully tested in 2016 and will be implemented on a permanent basis in 2017. Both recognition services for refugees provided by NOKUT gained substantial credibility in the society, both among the applicants, official authorities and educational institutions. Individual applicants with academic qualifications from war-torn countries are the target group of NOKUT’s services for refugees. At least 500 people (refugees or persons in a refugee-like situation) have been able to get NOKUT’s formal decision on recognition of qualifications from their home countries with the help of NOKUT’s refugee services since the establishment of the UVD-procedure in 2013. According to the survey conducted in 2014, nearly 50% of those who got their evaluations during the initial years were able to establish themselves in the labour market or continue their higher education in Norwegian higher education institutions.
Collaboration
NOKUT is actively sharing the experiences and practice in implementing special recognition services for refugees, both within Europe and beyond. We have established contacts with credential evaluation organisations and higher education institutions worldwide. In addition, NOKUT actively participates in activities for refugees organised by Norwegian higher education institutions – Akademisk Dugnad, developing bridging courses for refugees, working groups, training and so on. We are open to new collaboration opportunities in future.
Practice testing
Both UVD-procedure and Qualification Passport for Refugees are built on previously conducted pilot projects and testing in the Norwegian context. The methodology for the Qualifications Passport for Refugees tool developed and piloted by NOKUT, is now being tested within the scope of the pilot project for evaluation of refugees’ qualifications in Greece. The project is coordinated by Council of Europe in cooperation with the Greek Ministry of Education and Religious Affairs together with the ENIC-NARIC centres from Norway, Italy, UK and Greece. The Qualifications Passport for Refugees methodology is currently being tested in Italian, French and Armenian contexts within the scope of an Erasmus+ project coordinated by NOKUT.
Sustainability & Funding
NOKUT’s services for refugees are established on the permanent basis. The initiatives are funded by the Norwegian government – Norwegian Ministry of Education and Research.
Further reading